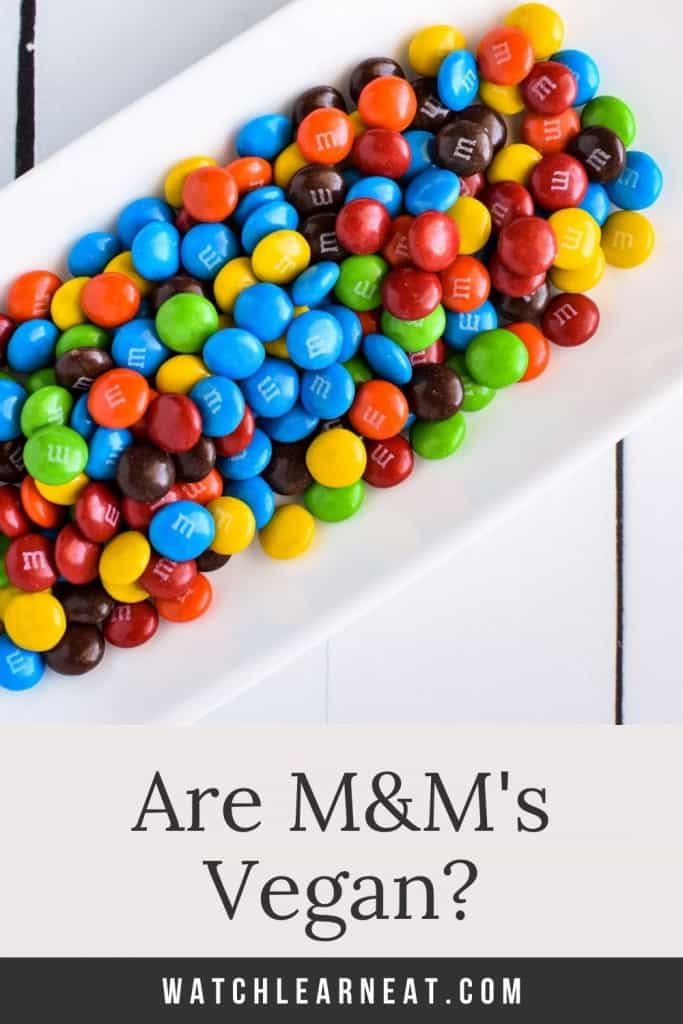 With so many M&M flavors, it was only a matter of time before we started wondering if any of them are vegan. Find out why M&M's are not vegan and what alternatives exist that are!

When you are vegan, it's important to consider all aspects of a food before consuming it.

For example, with regard to M&M’s: What type of food coloring do they use? Does the product have cow's milk in it? Is the chocolate being used fair trade?

Knowing these things before purchasing is an important part of living the vegan lifestyle.

At the same time, so is knowing where to find the alternatives if they aren’t vegan.

Are there alternatives? Yes!

When living a vegan lifestyle, your diet consists of food without any animal or animal byproducts in it.

For vegans, this means no dairy products, eggs or honey.

With that being said, the primary reason that the answer is ‘no’ to your question ‘Are M&Ms vegan?’ is because of the milk chocolate, the key ingredient for which is skim milk.

Of course, skim milk as an ingredient takes M&M’s out of the vegan category, but there's more to know about what's in these candies.

And less than 1% of the following:

As you can see, "natural flavor" is one of the ingredients listed above. Have you ever wonder what it means when a package says “natural flavors?”

It’s so sneaky, it makes you wonder why it isn’t categorized as artificial flavors.

What about other M&M flavors?

Milk products are the primary reason for M&M’s not qualifying as vegan, and this goes for any flavor variation of M&M’s…including crispy M&M, peanut butter M&M, peanut M&M, and even dark chocolate M&M’s (bummer).

In addition to M&M’s containing dairy, those colorful shells that help the chocolate “melt in your mouth, not in your hand” are also to blame.

While dairy is the main reason why this candy is not considered vegan, the artificial coloring on the candy coated shell is another ingredient that most vegans avoid.

This is because the amount of chemicals required to turn the chocolate shell into a bright color is continuously tested on animals.

Therefore, ethical vegans should avoid artificial coloring like the ones used on M&M’s (source).

Some flavors also contain palm oil, which is a controversial ingredient in the vegan community due to sustainability issues.

However, many companies are recognizing the need to switch to using sustainably-sourced palm oil.

Are M&Ms approved on a vegetarian diet?

Although it’s clear M&Ms contain non-vegan ingredients, vegetarians do not eliminate all of the same foods.

While they do not eat meat or fish, many consume dairy, eggs, honey, and other animal byproducts

From looking at the ingredient list (in the United States), it appears that M&Ms would be considered vegetarian-friendly as skim milk, lactose and milkfat are the only animal-derived ingredients.

Keep scrolling for the best vegan alternatives of the popular candy...

Just because M&M’s are off of the list of approved vegan sweet treats doesn’t mean you can’t indulge from time to time!

Luckily there are plenty of other vegan candies that can satisfy your sweet tooth.

Here are a few vegan options that are sure to cure any sugar cravings:

Offered at both Whole Foods or Amazon, Unreal vegan candy is sweeping the nation. They have several options for delicious vegan candy dupes, including Unreal’s peanut gems which rival M&M’s.

They also come in a crispy quinoa flavor.

If you are looking for M&M's for their bright colors and hard candy shell as a way to decorate a vegan dessert, then this chocolate candy is the best alternative.

My daughter’s favorite by this brand happens to be the dark chocolate almond cups which are made with almond butter instead of peanut butter.

Complete with a fun name, these M&M alternatives are made by the popular vegan company, No Whey Foods. These vegan chocolates make the perfect replacement for any M&M needs in your life.

It is worth noting that this company works hard to avoid any of the top major allergens, so if that is your primary reason for trying a vegan diet, then this is a safe treat for you and your family.

In addition to being dairy and egg-free, Choco No No’s Are:

These M&M-style chocolate candies come in chocolate and peppermint flavors.

And the company has a variety of other candy options.

Next on the list of vegan M&M alternatives are these bite-size delights.

Made by YumEarth, these vegan M&M-like candies are allergy-friendly and tasty too.

They're available in chocolate, mint, and crisped quinoa.

Though not technically an alternative to M&M’s and not even chocolate, just hear me out on this one as this childhood favorite is considered vegan-friendly.

Without the use of gelatin, this candy will satisfy your sweet tooth while also being fat-free.

So, if it’s something sweet you crave, not necessarily chocolate, Swedish Fish might just fit the bill.

Try some fruit for dessert!

Dried fruit like plums or pineapple is sweet, simple, and with no animal ingredients, completely vegan.

If you are vegan, lactose intolerant, or avoid dairy for whatever reason, there are plenty of candies to satisfy your sweet tooth other than M&Ms.

Whether you are looking for the crunchy sweet taste that an M&M has or need a colorful topping for a rainbow cake, you can find some incredible alternatives out there.

Now go grab a delicious vegan alternative to treat yourself with.

©Watch Learn Eat. All content and images are copyright protected, and are not to be used or republished without prior permission.

With a lifelong passion for cooking, I specialize in creating easy meatless meals that are omnivore-approved!

Learn more about me