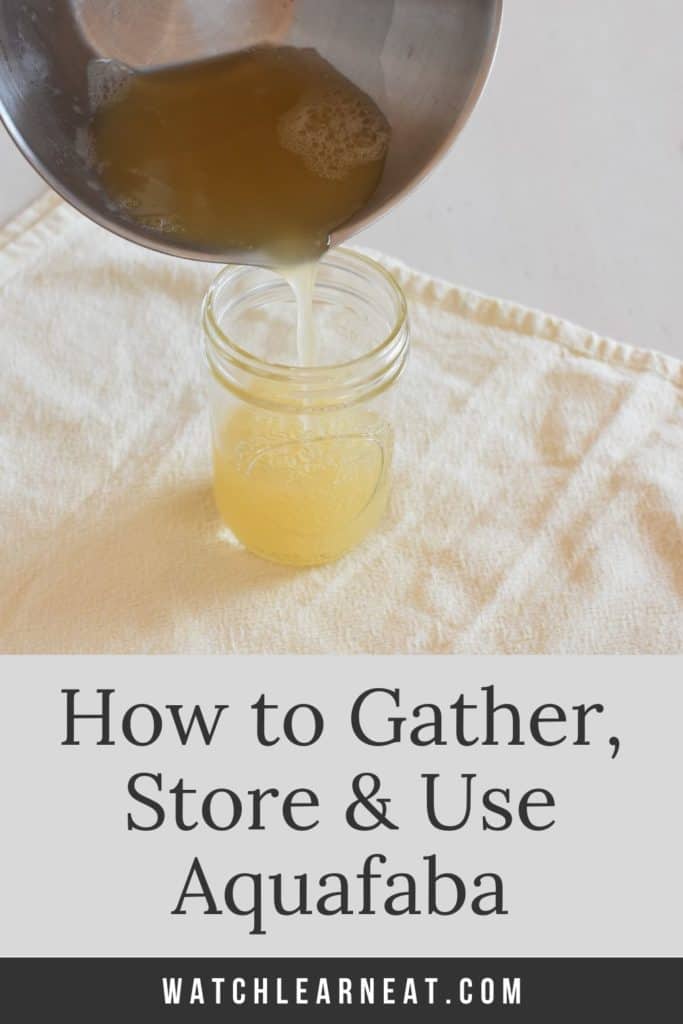 Aquafaba is one of my favorite ingredients to use in vegan baking and cooking. If you're new to aquafaba, you'll find out what it is, how to gather it, how to store it and some ways you can use it.

Aquafaba is the liquid found in a can of chickpeas that is typically sent down the drain when the chickpeas are rinsed.

The term "aquafaba" literally means legume water, as it is derived from the words "faba" meaning legume and "aqua" meaning water.

However, it is most commonly derived from chickpeas, particularly canned chickpeas.

This "chickpea water" has been gaining popularity in recent years as an egg replacement in vegan baking and cooking.

Its starchy properties allow it to work as a binder, and it can be used to replace whole eggs as well as egg whites in a variety of recipes.

Although little is known about its nutritional makeup, the website Aquafaba.com notes that 1 tablespoon of aquafaba contains between 3 and 5 calories.

How to gather aquafaba from a can of chickpeas

First, place a mesh strainer over a small mixing bowl with pour spout.

Then open the can of chickpeas.

The liquid that they are packed in is the aquafaba.

As you can see in the photo, my can seemed to have a straggler along for the ride. 😉

Pour the chickpeas into the mesh strainer to drain the liquid right into the bowl.

Tip: I recommend using "no salt added" chickpeas when gathering aquafaba for baked goods and desserts.

After the chickpeas are thoroughly drained, remove the mesh strainer from the mixing bowl and set it aside.

Pour the aquafaba from the mixing bowl into a mason jar.

Now you have your aquafaba!

Cap the mason jar tightly with the lid.

Shake the sealed jar a few times and now your aquafaba is ready to use.

As for the chickpeas, rinse them off in the mesh strainer and store in an airtight container in the refrigerator for 3-4 days.

How to store aquafaba

Aquafaba should be stored in a sealed mason jar in the refrigerator where it will last for up to a week.

You can also freeze it for up to 3 months.

I like to freeze it in increments of 2, 3 and 6 tablespoons in separate mason jars for future use.

If doing so, I suggest putting a label with the amount on each individual mason jar lid.

If freezing, be sure to let the aquafaba fully thaw in the refrigerator before using.

Do not defrost it in the microwave as this will change its properties.

Give the sealed jar of aquafaba a good shake a few minutes before using.

Aquafaba can be used in its liquid form (unwhipped) for baking to replace whole eggs in certain recipes such as cookies, brownies and muffins.

It also works nicely in boxed mixes calling for 1-2 whole eggs such as muffins, cupcakes and cakes.

Some recipes involve whipping aquafaba with an electric hand mixer or stand mixer, especially those using it to replace egg whites as in these meringues by Loving it Vegan and this chocolate mousse by Detoxinista.

If whipping, it's best to allow the aquafaba to come to room temperature if it had been in the fridge.

But aquafaba isn't just for baking.

It can also be used to make vegan whipped cream as demonstrated by Nora Cooks.

And, you can use it to replace the egg coating typically used when breading food.

I use it to coat tofu before breading as well as these vegan chickpea nuggets, this vegan air fryer eggplant and these vegan mashed potato balls.

It can also be used to make vegan mayo and subsequently, dressings from the mayo base like this vegan ranch.

In addition to an egg replacement, it can also double as an oil replacement in some recipes.

For example, a combination of aquafaba and almond flour work together to keep these vegan biscuits oil-free.

It can also be used in hummus in place of some of the oil while keeping a creamy consistency when not using tahini like in this basic tahini-free hummus recipe where I used half the amount of oil I had used before trying it with aquafaba.

You can also use aquafaba as a binder for vegan "meat" like in the mini "meatballs" in this quinoa soup.

So, are YOU ready to try aquafaba? What will you make with it first?

For more ways to replace eggs, check out this list of 11 vegan egg substitutes for baking.

©Watch Learn Eat. All content on this page is copyright protected and is not to be used or republished without prior permission.

With a lifelong passion for cooking, I specialize in creating easy meatless meals that are omnivore-approved!

Learn more about me